Islam is worship of the Creator and showing compassion towards creation.*

Living Islam: In accordance with its authentic sources, Quran & Sunnah for the maqásid: Shariah as mercy to humanity, a bastion and representative of moderate, mainstream Islam.

Islamic tradition: Rediscovering and re-deploying the partially forgotten, sometimes lost–original and authentic Way of Prophet Muhammad ﷺ, confirmed and guarded by the scholars and saints of Islam for over 14 centuries up to today. Not in the meaning of ’going back’ to the customs and conventions of old, without context and understanding.

How We Understand and Use the Word Tradition
Tradition means truths or principles of a divine origin revealed or unveiled to mankind.
In the case of Islam, tradition describes furthermore the words, sayings and actions reported from Prophet Muhammad may Allah bless him and grant him peace, which have been recorded in the hadith collections together with the entire Islamic religion, such as the Islamic schools of law, spirituality, saintity, etc. Imam Ahmad Vâlsan
NB: It is Islam that reigns - today - until the last day.

’To be traditional means to be part of a tradition, and traditions - by their nature - are moving through time and space.’ Sh A H Murad

* Or: Devotion to the Creator and mercy towards God's creation. - Imam F Razi

However Postmodern Man Is Distracted From His Self / Soul

Our Message to the World Regarding the Corona Plague

{Say: "Nothing shall ever happen to us except what Allah has deceed for us. He is our Lord (Helper and Protector)."
And in Allah let the believers put their trust.} Sura 9-51

The Relationship to Prophet Muhammad ﷺ

Our relationship with Prophet Muhammad - the blessings and peace of Allah upon him.

1. {There is nothing like Allah, and yet He is All-Hearing, All-Seeing.}
Whatever concept of God comes to the mind, know that God is not this.

2. Allah is always watching us…
Everything we do is reported by the angels. Repent, turn to Allah i.o. to clean your record.
About Allah

Those who know ≠ those who don’t.

True happiness can be achieved by the greater mercy of God - Allah. { And be steadfast in patience, for indeed, Allah does not allow to be lost the reward of those who do good (of the righteous). } 11-115

The disbelievers claim that religious teachings only rest on 'man-made' ideas, having no relevance for human life. In truth it is {the revelation of the book (scripture) from Allah, the Exalted in Power, Full of Wisdom.} 46 - 2 It is a revelation from Allah to open the heart to the light of divine guidance.

Hearts are places of intellect or ’intellectual intuition’, or understanding (maghrifa مَعرفَت ), not only of emotion. Pure intellect transcends reason and modern rationalism. Islam

Those who rely on their mental capacities (on reason) alone: Lâ ya`lamûn:
{ Allah has sealed their hearts so they do not know. }
9-93
About the Heart

For those who yearn to come to a deeper understanding about the Real ( الحَقّ ), Allah, the advice is:

”Study the Quran (regularly), for it will act as an intercessor and entreat for its readers on the day of Judgement.”
Prophet Muhammad ﷺ

Or: “Die before you actually die.”
Choose to die spiritually from your physical desires, so that you live forever.
Shaykh Ahmed Saad

It is about the return to the Lord before actually returning [finally to Allah at death] and it refers to the subjugation of one's animal soul by one's rational soul.
Prolegomena; Sh Syed M Naqib al-Attas

Spiritual advancement is necessarily combined with knowledge of Allah سبحانه و تعالى : It will make the seeker of divine knowledge realise that he needs to wake up from his sleep of love of this world (dunyā) while following the ego (nafs).

Imam Ali (may Allah ennoble his face) said: ”People are asleep as long as they are alive, when they die they wake up.”

They are asleep to the infinite bounties of Allah, the All-Merciful, which they receive more or less every day - asleep to His blessings (barakah بركة‎ ) and unthankful, ignoring what their life could have been, had they taken heed.
About Prophet Muhammad ﷺ

{And of His signs is the creation of the heavens and the earth, and the difference of your languages and hues. Lo! herein indeed are signs for men of knowledge.}
30-22

Comment: This verse indicates the difference between races and languages and that those difference are a blessing, not to be taken negatively and that we are called to relate to and learn from each other, instead of isolating from each other or negative thinking about ’the other’.

This - in order to become truly human. 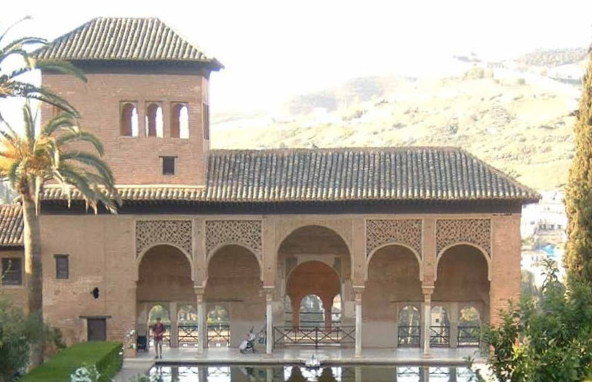 Serenity and beauty at the Al-Hambra

*This is not new, it was already mentioned in the Quran:

{Or do they say, "He (Muhammad) invented it"? Rather, it is the truth from your Lord, that you may warn a people to whom no warner has come before you [so] perhaps they will be guided.}

The Shari`a as Mercy to Mankind

The Shari`a is compassion and justice, it is the basis for behaviour and it seeks the welfare of human beings. If its application leads to the opposite, then our understanding and interpretation needs to be re-evaluated in the light of the Texts.

Shari`a refers to wide-ranging moral and broad ethical principles drawn from the Quran and the practices and sayings (hadith) of Prophet Muhammad ﷺ. (See link below: What Shari`a means)

Allah says in the Holy Quran:

{We have established for you a code of conduct and a religion. Follow it, and follow not the whims of those who know not.}
45-18

Shari`a: It is a clear path (a code of conduct and a religion) by which Allah leads people to the truth, warning man (and woman) not to erect their desire as a god (45-23), and also by not going along with the caprices (hāwa) of the nihilists, not even of the people of the Book. Following them or the disbelievers in their whims and expectations would empty the heart of the faithful and it would seal it up and cover his sight (45-23).

Such a great calamity when the empty souls will be blown into the abyss of the raging fire (hāwiyya) like scattered moths or other debris. (Sura 101)!

Mercy - an Integral Part of Islam
On The Sharia, S. H. Nasr
Sharia and Haqiqa, Al-Hujwiri

Shorturl of this page: http://bit.ly/_ix