Islam - The Way of the Prophets

Islam is the way of the Prophets and the elect of human beings since our father Adam through our father Abraham then Moses, Jesus, and Muhammad, ﷺ - upon them blessings and peace, consisting in true worship of our Creator and excellent living and dying until we return to Him and enter everlasting life, in which this life forms less than a drop in the ocean; a way the formal description of which is:

[1] Faith in the one God alone without partner, son, or spouse, in the angels, the Divine Books, the Prophets and Messengers, the Day of the Resurrection and Judgment, and the foreordained Divine decree that includes both good and evil, and

[2] Praying the five prayers in their appointed times every 24 hours, remitting the poor-due, fasting the month of Ramadan, and performing, if physically and monetarily able, the pilgrimage to Makka.
Shaykh Gibril F Haddad

In contrast to what is generally understood as religion, for Islam the meaning of religion (or dīn ) is much more comprehensive, including all areas of this life, the next life, of practice, of the intellectual part of it (imān ) and of a kind of higher consciousness (Ihsān ). 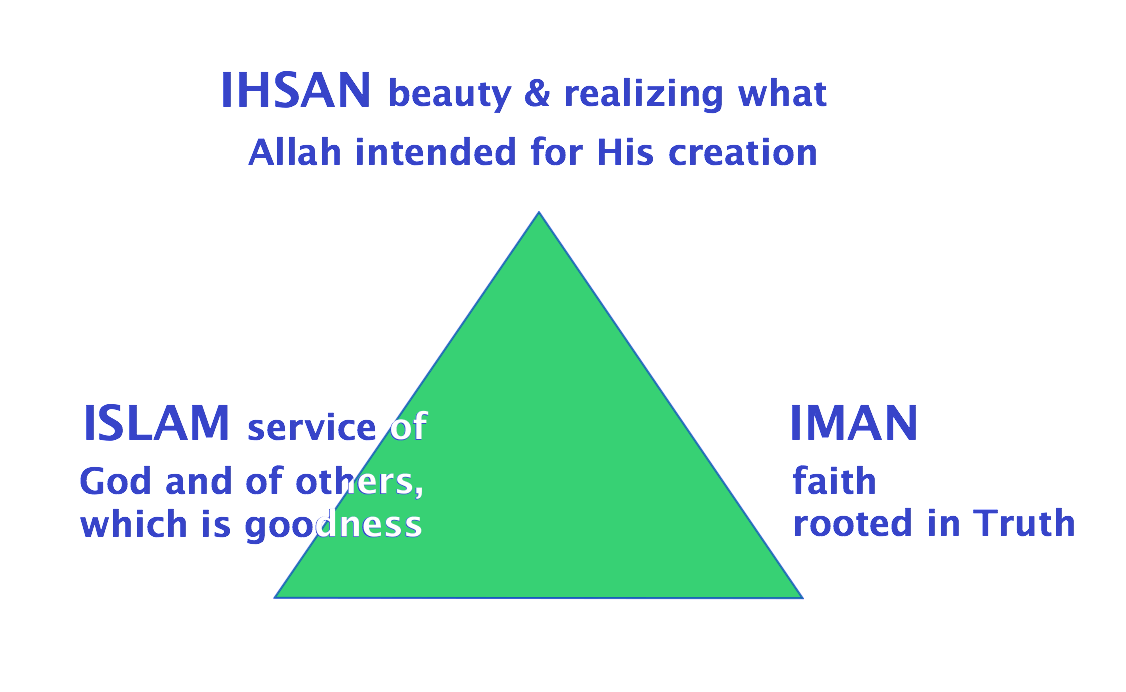 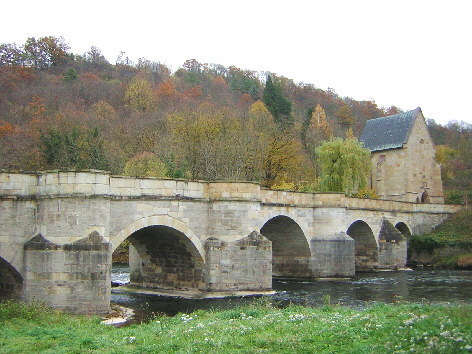 Bridges transport you from one station of being to another…

1.) The dīn (religion of Islam ) is the way of life as modelled by the Prophet Muhammad ﷺ, also - it is the lifetransaction for what we owe to Allah.

2.) Linguistically this word can mean obedience, worship, or recompense and repayment. The shari'ah definition however is: that which Allah legislated upon the tongue of His Prophet ﷺ concerning laws. Synonymous with this are the words Islam, and shari'ah.

3.) It is not enough just to learn and believe in Allah and His messengers. (Peace be upon them all). Rather, one has to also learn:

3.1) the laws by which Allah wants a person to live by,
3.2) the specific beliefs concerning unseen things, and
3.3) the method of purifying the human soul until it can see Allah.
These three things together are called the dīn.

Man Shut Off From Heaven

When man, ignorant of the nature of reality and the role of consciousness, has shut himself off from Heaven (!) he has ended by losing his intuition of everything that surpasses himself…

The Most Comprehensive Verse in the Qur’an

Ibn Masud رضي الله عنه said about this verse (16-90): The most comprehensive verse in the Quran is in Sura Nahl, and then he recited this verse.

{Allah enjoins justice and excellence (in all things), and charity to kinsfolk, and forbids lewdness (shameful deeds), wickedness and oppression. He exhorts you in order that ye may take heed.}
16-90

Justice
Putting everything in the right place at the right time.

The highest form of justice is tawhíd: Giving Allah His due, not giving His due to someone else, which would be ’shirk’. Also justice for parents/ children, husbands, wives, scholars/ students, rulers, and everyone else.
Ihsan - Excellence in All Things
Being kind and doing excellent things - with excellence and only things which are good
Charity
Giving to the relatives and those closely related to you.

Whatever else of charity we are doing, the fact that they are related to us by blood, means they have a greater right over us.
Fahsha': indecencies
Fahsha' is sexual or other indecencies, or shameful deeds

Allah (may His Majesty be exalted) prohibits you from shameful deeds, indecencies. The internet is full of indecencies, and we have to guard ourselves against those things.

Sometimes indecencies can be ’normalized’. The danger here is that the heart, instead of rejecting the wrong, becomes accustomed to the wrong. Or that maybe later the heart even joins in with the wrong (may Allah protect us from this).

And we don’t publicise our sins (for example to garner sympathy), because sins can become normalized.

When moral righteousness has become eroded, our souls become like houses of cards tumbling down. And by then we do realise that we have arrived in 21st century's post-modernity.

Let’s make sure we’re not going down this road, because we can see where other people before us have gone, it could also happen to us as a community, (may Allah protect us from this).
Munkar: wickedness
All kinds of ~, wrongdoing, sins as a whole
Baghiy: = zulm: oppression
A specific type of sin, which involves oppression, or the denial of some-one’s rights. It's a type of tyranny, one of those is tyranny within families. So there are levels of tyranny, husbands to wives, parents to children, even children to parents… 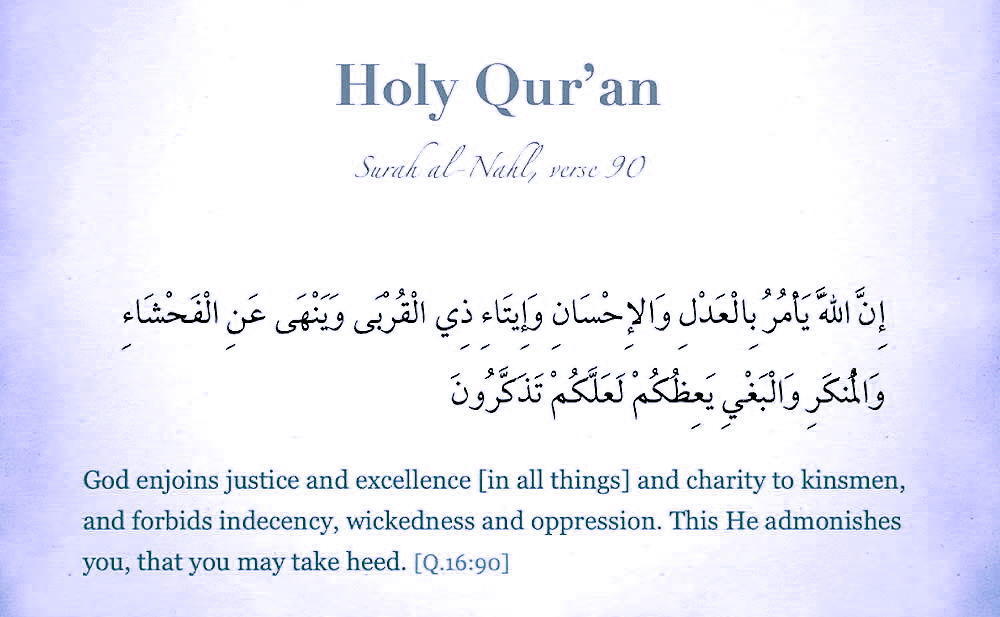 Most Comprehensive Verse in the Qur’an: A Brief Reflection; Sh. Surkheel Abu Aaliyah

A Quote On the Sharia

the Sacred Law of Islam

The entire sacred law is merciful, so if it goes from mercy to cruely, it is not from the sacred law.

The entire thing is wisdom, so if it goes from wisdom to folly, it is not from the sacred law.

The entire thing is common benefit (maslaha), so if it goes from benefit to harm, it is not from the sacred law.

The entire thing is justice, so if it goes from justice to tyranny or oppression, it is not from the sacred law.

Allah unveils Oneness in this diverse world of multiplicity - through the manifestation of Divine acts and attributes, which are the signs which disclose the Sole Source behind them – for those who reflect.

Tawhid is for us human beings (al-muwahhiddun): making Ultimate Reality one (and It is ONE already), seeing unity in diversity (which is a sign of God), so as to understand the One out of the many.

This by grasping the word of the Lord of the universe in His revelation:

{He is the First and the Last, the Outward and the Inward; He has knowledge of everything.}
57-3

Shorturl of this page: http://bit.ly/_isl