{ “Bismillahi - rrahmani - rraheem –
In the name of Allah, the All-Compassionate, the All-Merciful: }

{ Surely this Quran guides to that which is most upright and gives good news to the believers who do good that they shall have a great reward. And that (as for) those who do not believe in the Hereafter, We have prepared for them a painful chastisement. }
The Holy Quran, Sura 17-9/10

Sincerity towards the Quran:

An-An-Nawawi: “As for sincerity for the Book of Allah, exalted is He,
• it is affirmation that it is the speech of Allah, exalted is He, and His revelation which nothing of people's speech resembles, and the like of which no one among creation is capable
• then honouring it and
• reciting it as it should be recited
• beautifying it
• having humility with it
• reciting its letters correctly
• defending it from the esoteric interpretations of deviants and the opposition of those who refute it
• affirmation of what is in it
• standing by its rules
• coming to understand its sciences and metaphors
• considering its admonitions with respect, reflecting on its wonders
• acting on its unambiguous statements and accepting its ambiguous ones
• research into its general and specific statements and its abrogating and abrogated [ayat]
• spreading its sciences
• inviting others to it and to that which we have mentioned of its good counsel.” 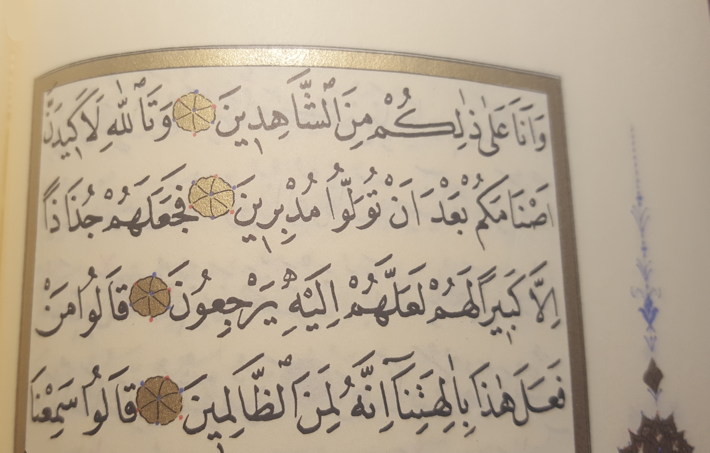 • What The Quran Enjoins us to do & Warns us Not to do ( 7 items )
• Quranic Definitions ( Concerning three Islamic concepts:
the righteous, the wrong-doers, the disbelievers )
• [Why it is] Unfeasible to Act Solely On The Basis of The Qur'an, Gibril F Haddad

Absurd Accusations Against the Quran

• Top Five Misquotations Of The Quran

The recent surge in negative sentiments towards Islam and Muslims has resulted in many attempts to depict the religion as inherently violent.

The phrase { kill them where you find them } Verse 2:191 is by far the most frequent phrase that is misquoted by ardent Islamophobes and radical extremists. But this battlefield exhortation comes right after the verse which states { fight against those who fight you } and it comes right before the part which states { but if they cease fighting, then let there be no hostility except against oppressors } !
[Top Five Misquotations Of The Quran - muslimmatters.org]
muslimmatters.org 2017

Learning the Quran and Reading It

Isa bin Muhammad (Alaihir Rahmah) says that I once saw Abu Bakr bin Mujahid (Alaihir Rahmah) after his death in a dream reading the Holy Quran. I asked, "You have died, how are you reciting," upon which he said, "After every Salah and finishing of the Quran, I would pray "O Allah, give me the Taufiq to recite the Quran in my grave" and that is why I am praying." (Faizan-e-Sunnat)

Ahadith About Learning the Quran and Reading It

1) The best of you is he who learnt the Holy Quran and taught it to others. (Bukhari)

2) Undoubtedly, the heart gets rusted like metal gets rusted when water goes over it. The People asked, "How can they [hearts] be cleaned." The Prophet replied, "To remember death in abundance and to recite the Holy Quran." (Mishkat)

3) That chest which does not have any Quran in it is like an abandoned house. (Tirmizi, Darmi)

4) Whoever read the Quran and memorized it and believed its Halal to be Halal and its Haram to be Haram [i.e., accepted it commandments of Halal and Haraam], Allah will accept the intercession for such 10 people on from him whom Hell had already become Wajib. (Tirmizi, Ibn-e-Majah)

5) Whoever is an expert in reciting the Holy Quran is with the Kiraman Katebeen and whoever reads the Quran with pauses and it is difficult for him, that is, his tounge does not move easily and he recites with difficutly for him there are two rewards. (Bahar-e-Shariat)

6) The one who has memorized Quran will be told to read and climb and recite with Tarteel (clear and distinct recitation) like you used to read with Tarteel in the Dunya; your place will be where you read your last Ayat. (Bahar-e-Shariat)

9) Read the Quran when you heart feels affection and attachment and when your heart becomes bored stand up that is stop reciting the Quran. (Saheeh Bukhari and Muslim)

10) Decorate the Quran with your (good) voices. (Mishkat)

11) O People of the Quran, do not make the Quran a pillow, that is do not be lazy and be careless, and read the Quran in the day and night like it is the Haq of Recitation, and spread it, that is, read with good voices or do not take compensation for it, and whatever is in it, reflect upon itso that you may attain success, and do not hurry in its reward because the reward for it is great (which will be given in the Akhirah). (Bahiqi)

Rewards for Certain Surahs and Ayahs

1) Surah Fatiha is a cure from every illness. (Darmi, Bahiqi)

2) Do not make your home a graveyard, the Shaitan runs from the home in which Surah Baqarah is recited. (Sahih Muslim)

3) Whoever memorized the first ten ayahs of Surah Kahf will be saved the Dajjal. (Sahih Muslim)

4) Whoever recites Surah Kahf on the day of Jummah, there will be a Nur brightened for him between two Jummahs.

5) Everything has a heart and the heart of the Quran is Surah Yaseen, whoever read Yaseen, Allah will write the reward of reading the Quran ten times from him. (Tirmizi and Darmi)

6) Whoever reads Surah Yaseen for the pleasure of Allah, his past sins will be forgiven so read this near your deceased. (Bahiqi)

7) (Reading) Qul hu WAllahu Ahad (Surah Ikhlas) is equal to [reading] one third of the Quran.

8) Whoever read Ayatul Kursi after every Fard Salah, he will be under the protection and security of Allah. (Dailmi on the Authority of Sayeduna Ali)

9) (On the Day of Judgement) a caller will say O Recitor of Surah Inaam, come to Jannat for loving Surah Inaam and its recitation.

11) Whatever task is not begun with Bismillahi Rahamni Raheen remains incomplete and unfinished.


Etiquettes and Rules of Tilawat

4) It is Haraam that everybody read the Holy Quran in a gathering loudly at once, however, it is necessary to read loudly enough so that one can hear what he/she is reading, that is, if there is no other distraction like noise. (Bhare-e-Shariat) Also, many children read together at once in a madrasa loudly for learning purposes and this is okay.

5) It is better to read the Quran loudly that is if somebody praying, sleeping, or somebody ill will not be distracted. (Gunyah)

6) If somebody is reciting the Quran incorrectly then it is Wajib to tell him/her unless if one fears jealousy and hate. (Gunyah)

7) To memorize the Holy Quran and then to forget it is a sin.

10) The way to do Sajdah of Tilwat is as follows: If one hears or reads the Ayat of Sajdah then he should stand with the intention of performing the Sajdah of Tilawat and saying Allahu Akbar should go into Sajdah and should recite the Tasbeeh of Sajdah atleast three times. Then, saying Allahu Akbar, one should stand up. To say Allahu Akbar both times is Sunnah. Similarly, to stand before and after the Sajdah is Mustahab. (Durre Mukhtar)


Lastly, learn how to read the Quran in the company of a Qualified Sunni Alim [and mature sisters must go to a Qualified Sister] who can teach them how to read as this is necessary. At times, while reciting many brothers and sisters unknowingly make mistakes in recitation which change the meaning which breaks their Salah. Likewise, send your children to Madrasas where they may learn how to recite the Quran with correct pronunciation and Qirat. If there is not a madrasa in your town, then establish one. Knowledge of Islam leads one to love Allah and helps to build a good moral character within the Muslim community.

From: Islamicacademy.org with kind permission.

publ. 18 Oct 2018
See this [link] for more information on the book. Make sure to share this lesson with others so they can also benefit. Follow Sh. Musa Furber’s page so you’re notified when the next video goes live.