2 Kinds of Extremism and Terrorism

Extremism and terrorism are shattering the harmony of the peoples of this world. This is done from two directions:

→ From the side of militant groups who like to ground their extremism in some absurd theories, world-views or even religions. These groups are political weapons in the hands of the arrogant elites to stir up fear and incite hatred for ’the other’.

Those who use the language of Islam and its symbols in order to kill random, innocent people… then this is a betrayal of the noble message of our Prophet - the blessings and peace of Allah upon him. (More on this topic on this webpage.)

Also right-wing, supremacist, nazi groups have emerged, while being emboldened by their leaders, in places such as the US, Russia, India, to mention a few. For example: USA.

→ From the other side of state-actors, who justify their extreme policies of spreading terror during wars and other obscure schemes claiming some ”higher purpose”.

It seems to be all too easy to forget about this other side of terrorism: State actors bombing, killing innocent people over long periods of time - an anomaly which no-one can defend!

We can see how the bigotry, extremism, oppression, violence and wars are wrought on Muslim (and other) nations of the world, who just want to be themselves and live in peace, independent of the global powers of West and East.

After the end of the Cold War it was Islam and Muslims who were turned into the new enemy: Afghanistan, Pakistan, Iraq, Somalia, Syria, Libya, Yemen and not the least Palestine. The idea of ’convivencia’, that people of different ethnicities and religions could live harmoniously together - as they usually do - is not an appealing idea to war mongers and preachers of hate.

At this point we will not do an analysis of state-sponsored terrorism, only to remind the reader of the following:

”The reality is that innumerable forms of terroristic violence exist around the world and they are many, they are constant and they are frequent. In some respects, it’s perpetual. They are also done in the name of other ideological values, such as those of secularism. But when it comes to Islam, mainstream discourse insists on identifying it as Islamist.”
Is It Correct to Identify Terrorism With 'Islamism'?

As an example of the interference of the global powers in every corner of the world,
here when ISIS was still very active: see below.

Terrorism is “Made in the USA”. The “Global War on Terrorism” is a Fabrication, A Big Lie

Many scholars have researched the so-called proofs of the extremists (from the side of Islam) and found that they are not sincere or at least helplessly ignorant of the sources which they have picked out of the ocean of Mercy which constitutes the Islamic teachings.

One of the reasons why the extremists are able to do this - thereby deceiving quite a few well-meaning Muslims - is that - in the wake of colonization in the 18 & 1900s - the Muslim nation has not only lost its ruling system (1924 Khalifah, Sharia, its scholars, its islamic universities and the whole teaching structures), but also its own law enforcement and security forces, which would take care of the criminals.

The answer to violent extremism amongst Muslims is tasawwuf. Not Sufi clubs; but tazkiyat al-nafs.

Spiritually lost and imbalanced individuals struggling with self-loathe, insecurities, jealousy, and other emotions, unable to control them, are filled with anger and frustration. Instead of directing the anger and frustration towards their lower self (nafs), they take the easy way out and target the temptations.

The solution, however, is to instead target the very essence of the temptations themselves, to purify the self from desiring that which is displeasing to the One, and transform into desiring the Book and the Sunnah.

This is the role of tasawwuf.

Another Reason for Extremism

Another reason for the rebellion of the deluded (most militants are ordinary people who have been led astray [fn1]) extremists is the ongoing military onslaught on the Muslim ummah (the global nation of Muslims). The arrogant powers of the West and the East in countries such as Kashmir, Palestine, Iran, Afghanistan, Iraq, Syria, Libya, Yemen etc. constantly ignite the flames of hatred by their meddling and interference. Profits so gained are never enough for the military-industrial complex in countries such as the United States of America, Israel, Great Britain, France, Germany, Russia, China, India in various degrees of severeness.

This supremacist policy engenders despair especially among the young generation with its ongoing encroachment into the countries of the South and exploitation and blocking any option for self-governance and true independence.

It is difficult to convince people of the benevolence of the Western and Eastern powers when decade after decade their countries' economic bases are eroded. This is neocolonialism and an ongoing nepotism by corrupt leaders.

How Islam became the new enemy of the West after the Cold War had ended. (Profits for the industrial-military-supremacist complex).

How the worst dictators are regularly supported by Western (and Eastern) powers.

→ How the most extreme islamic groups were fostered, trained and supported by Western clandestine organisations, which later turned into the worst caricatures of Islam, while still finding support from the secret cabals of various ruling elites.

A scene from the earthly hellscape with beams of light from the burning city in the background.
From The Garden of Earthly Delights. Hieronymus Bosch, 15th cent.

Declaration by Sh. Yasir Qadhi Re: The Attack in Nice, France

The latest attack and brutal murders of innocent people in the French city of Nice cannot under any circumstances be justified or overlooked.
[ → However there was a provocation. ]

We are against violence and the use of terror in general and against the hurting and killing of people in particular (people of whatever political or religious or other tendency) either by vigilante militants or by state military. - - Horrible that it is necessary to state the obvious!

We are also against dehumanising policies, which reduce people to consumers and worse to commodities and numbers, without rights and dignity, in the interests of international big capital, greedy landlords, and the rest. And not to forget: there are different kinds of terrorism. fn14

Al-Azhar: Islamic State Is Corrupt And "A Danger To Islam."

But Conservative Media Won't Tell You That

Lebanese paper The Daily Star reported that Al-Azhar's Grand Mufti Shawqi Allam, Egypt's highest religious authority, denounced the Islamic State as a threat to Islam and said that the group both violates Sharia law and humanitarian law: "[They] give an opportunity for those who seek to harm us, to destroy us and interfere in our affairs with the [pretext of a] call to fight terrorism." [The Daily Star, 8/13/14]

”As we have said time and again shaytan and his followers always want Muslims to make less Dhikr of Allah Most High , less Salawat on his Prophet (upon him blessings and peace), less Tarawih in Ramadan , less respect for the Awliya, less Tawassul through the Prophet and Salihin, unless pursuit of all the blessings and spiritual knowledge and practice that Allah has made available to this Umma.

Even when the Umma is being physically attacked and slaughtered East and West, these enemies have no shame in continuously trying to divide Muslims, eviscerate the Deen from its spiritual content and weaken Da`wa as much as they can.”

”They wish to extinguish Allah’s light by formalizing his religion, encouraging secularism, and dissassociating Muslims from their emotional attachment to Allah and his Prophet and Awliya which is the basis of strong faith.

They are trying to instead to produce automatons who themselves and others to follow rules without understanding. This is the exact recipe of extremism that is now devastating the world.

Whenever we see someone trying to push such an agenda we should recognise them for what they are - Wahhabi ”Salafis”, model offshoots of Kharijism - and send them packing, just as each generation of Sunni teachers did in their time and just as the truth scholars of Ahl al-Sunna have always done and will continue to do. Wa-amin Allah al-Tawfiq wal-Hidaya.”

Declaration About The Roots Of Terrorism

As much as we are against Daesh’s actions of hatred and cruelty, an organisation (along with similar groups) which chose the most obscure, marginalised or deviant sources of Islamic law, and which thereby transgresses against major, generally accepted principles of our noble Islam, we also have to widen our horizon on this issue of extremism and terrorism and try to find out more of what is behind appearances:

Quote from the video with Dr Michel Chossudovsky (link below):

”The so-called war on terrorism is a front to propagate America's global hegemony and create a new world order (NWO).

Terrorism is made in the US, and the terrorists are not the product of the Muslim world. The US global war on terrorism was used to enact anti-terrorism laws that demonize Muslims in the Western world and create Islamophobia. [□ comment: At the same time are those anti-terrorism laws used to curb democratic rights & liberties and surreptitiously establish the police & surveillance state.]

It is Nato that was responsible for recruiting members of the Islamic State, while Israel is funding global Jihad elements inside Syria.

”Al-Qaeda and (its) affiliated organizations including the Islamic State are not independent organizations, they are sponsored by the US and its allies. It is documented that prior to 2011, there was a process of recruitment of Mujahediin to fight in Syria, and this was coordinated by Nato and the Turkish High Command. This report is confirmed by Israeli news sources, and unequivocally we are dealing with a state sponsorship of terrorism, the recruitment of mercenaries, the training and financing of terrorism.”

”As much as possible the US has delegated its authority to other partners, despite the fact that ultimately this is an initiative of US intelligence, coordinated with the US State Department and the Pentagon.” Dr Michel Chossudovsky

Statesponsorship of terrorism, recruitment of mercenaries, training and financing of terrorism

Prof. Michel Chossudovsky: Terrorism is Made in the USA.
The Global War on Terrorism is a Big Lie
https://www.globalresearch.ca/terrorism-is-made-in-the-usa-the-global-war-on-terrorism-is-a-fabrication-a-big-lie/5435816

➟ The U.S. has a homegrown terrorist problem and it’s coming from the right.

LivingIslam Pages on Extremism
(Even before ISIS/ Daesh)
What is not dealt here (with these texts) is the extremism, violence and oppression wrought on many Muslim nations and other peoples and communities of the world. 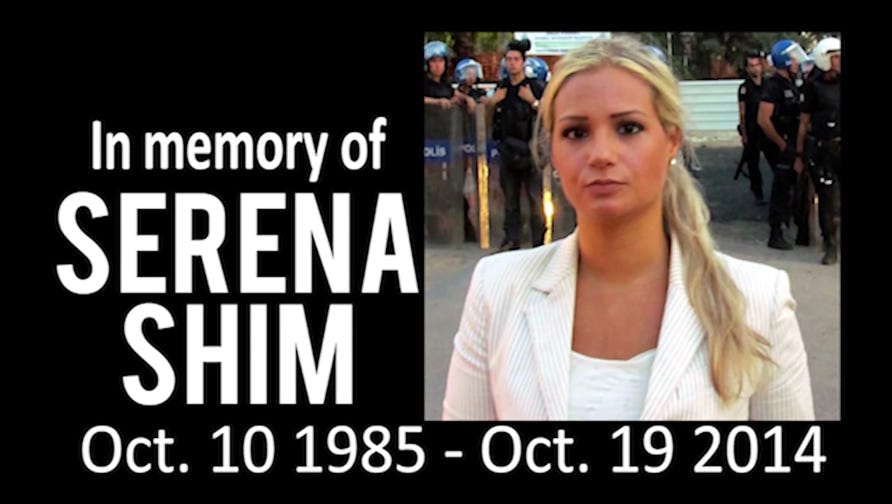 In memory of Serena Shim

The case of reporter Serena Shim 2014

Evoking her past reports as evidence, Serena Shim ruminated on what the MIT’s (Turkish National Intelligence Organisation) interest in her might have been, citing her firsthand reportage on IS and al-Qaeda-affiliated militant groups crossing freely into Syria from the Turkish side of the Bab al-Hawa border via “World Food Organisation trucks” and other non-governmental organisation covers.

“I wonder if they think that I’m going to… focus on a different area and that I’m using the umbrella of Kobani and I’m actually getting in here to do some type of investigative journalism. Because I don’t see it just being specifically in that area. And it just gives me the feeling that something is boiling and something is brewing that they think that I’m here to catch,” she said in the report.

Two days later, the rental car that Shim was riding in was involved in a car crash in Turkey’s Sanliurfa province. Her family found the circumstances of the accident suspicious and alleged foul play by Turkish authorities.

She died allegedly of heart failure a half-hour after arriving at the hospital.

[No further investigation into her death has ever been conducted, neither by the officials of her country, the USA, nor by Turkey.]

Mystery over US journalist death in Turkey: Accident or Murder? YouTube
https://bit.ly/3dlntap

Shorturl of this page: http://bit.ly/_clarextr